Saturday, November 10th, 2018 an event about Mozilla’s project’s and contribution opportunity was held at An- Najah National University in Nablus – Palestine . The event was organized by Palestine tech meetups and IEEE Najah students branch . Many university students and professionals attended the event, they were so excited about Mozilla technologies and they were surprised that Mozilla has many many things besides to Firefox. the greatest product!

The event lasted for four hours and it has three main speakers who talked about several topics related to Mozilla .

The event started by Yamama Shakaa, a Mozilla tech speaker who is interested in improving education in Palestine. Yamama started by giving introduction about Mozilla products and projects. She talked briefly about types of Firefox and what Firefox provides for developers. Also, she talked about resources Mozilla provides for developers like MDN( Mozilla developers network) and Mozilla hacks. Moreover, she gave quick introduction to some Mozilla developers innovations like RUST and Web Assembly .

The next speaker was Aya Sofan, a Mozilla tech speaker who recently got her master degree in data science. Aya talked about machine learning technology. She linked machine learning with common voice which is a Mozilla’s initiative to help teach machines how real people speak. She encouraged the audience to donate their voices and help in increasing Arabic voices. 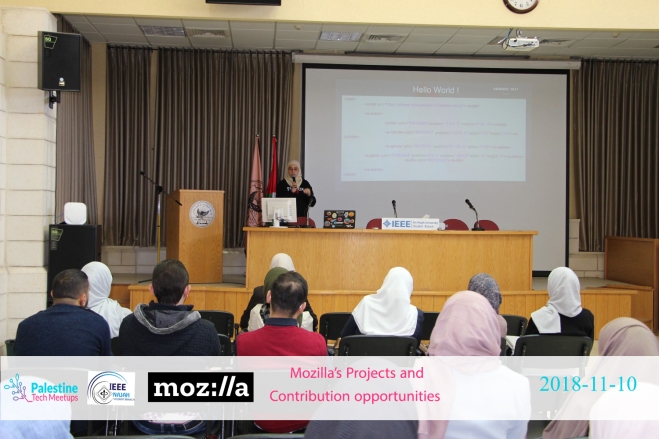 It is worthwhile to mention that Ayah, Yamama and Ruba are Techwomen alumni who got their mentor ship at Mozilla and continues their contribution with Mozilla when getting back home.

More photos from this link